WARNING – This article contains spoilers for the Path to Carcosa campaign

Matt Newman, lead developer of Arkham Horror the Card Game, said in his most recent MB appearance, “there’s never going to be a scenario in Arkham where you aren’t taking horror.” That makes sense, and people should be able to read a box that has “Madness” or “Horror” in the title of a game, and make a judgement about whether they want what’s inside.

That said, even if the terms aren’t in use, mental health difficulties will be something very real for a lot of people playing this game, or for those close to them. Matt has said in the past that he’s aware of the need to be sensitive about this topic, and I don’t doubt his sincerity, but I think we can accept his statement and still want to take a closer look for ourselves. After all, “madness” is a delicate topic –the chances are that we’d all give slightly different answers to questions like “When is it appropriate to mix madness with humor?” and generally “When are games in danger of drifting into the realms of bad taste?”

I put some more general thoughts, including Mansions of Madness and Eldritch Horror on my own blog, but here today for the Mythos Busters, I’m just going to focus on Arkham Horror the card game.

The most recent Arkham releases have been in the Path to Carcosa cycle. Inspired by Robert Chambers’ The King in Yellow, this cycle taps in very deeply to themes of questionable states of reality, unreliable narrators and the constant sense that things may very well not be as they seem.

This really comes to a head in the 4th scenario, which sees your investigators visiting the notorious Arkham Asylum. Not a Joker or a Scarecrow in sight, this place is a prison for the mad: a damp, miserable place full of cold isolation. Brutality from guards or other inmates is likely to be just as dangerous as the esoteric, experimental “treatments” that inmates might find themselves subject to. 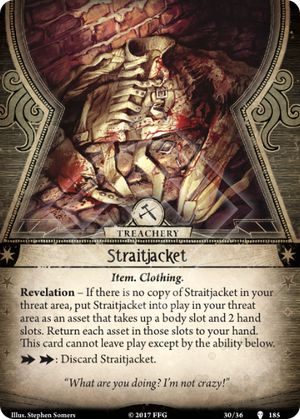 As you play through the Unspeakable Oath, there is a strange blurring of reality – increasingly it becomes unclear: are you truly here to interview a patient? or simply residents of the asylum harboring weird delusions about fantastical cults and alien beings? Why are you suddenly the one wearing the strait-jacket? And why do you need to start a fire or a riot in order to be able to escape this place by jumping the fence? Matt spoke in his recent MB interview about how proud he is of the way that virtually every sentence in that opening can be read in two different ways.

The harsh reality really kicks in at the end of this scenario. Up until now, however badly you did, there has been little that could interrupt the ongoing flow of a campaign.

Failure to escape in the Unspeakable Oath, however, sees your investigator immediately driven mad, and confined for the duration to the care of Asylum doctors. The campaign might continue without you, but that individual has lost their mind, and will be playing no further part. All the events of the previous scenarios are now seen as the violent delusions of the criminally insane.

Having been slightly rocked back on my heels by this outcome, I decided to go back and re-examine the whole way that mental health is portrayed in the Arkham Files games.

Before I get too far into specifics, I wanted to note that (at least in the UK, where I’ve done most of my research) Doctors and other medical professionals virtually never use the terms “Mad” or “Madness” any more – they are too vague, too loaded with meaning, and generally not very helpful.

As part of my research for these articles, I spoke to a friend who has worked in Psychiatry. I was quite struck by the strength of his reply, and wanted to include it here, as food for thought.

“I think that I have rarely seen madness portrayed in a positive way. Sometimes it’s so silly that I don’t think it would be likely to have a negative impact, even at a subconscious level … but in a Lovecraftian sort of context I would think it would be more likely to be broadly unhelpful, regardless of how entertaining the stories or games were as a whole. Although of course, people could (and almost certainly do) argue that that context is so clearly non-real that it doesn’t matter, but I think that the way subconscious thought and the power of suggestion work mean that it actually does matter even if you can rationalize it on a surface level.”

With that in mind, let’s take a closer look at some of the specifics in Arkham LCG.

Madness I: A Form of Weakness

When you really examine them closely, a lot of the madness-related cards in this game are quite simplistic – There’s an allusion and a piece of art-work to accompany it, but by-and-large, it boils down to “when X happens, Y happens too” or “Immediately do X” followed by a double-action to remove it. I think it would be interesting to see madness cards more fully developed in the game- something that was less commonly acquired (so that the game didn’t become impossible), but which had a more meaningful ongoing impact. In reality though, the level of abstraction needed for a card game probably just doesn’t allow this.

3 investigators have a “Madness” as their signature weakness: Wendy Adams, Lola Hayes and “Ashcan” Pete. In each case, the mechanical impact of the card – shutting down a key element of that individual’s play-style seems to be a bigger driving force than the thematic sense of the card’s name. Wendy is traumatized by a past experience, which causes her to take horror, and also removes her ability to re-play cards – is re-playing a card from discard something to do with stirring up painful memories? “Ashcan” Pete is ‘Wracked by Nightmares’ – it would seem most likely that this sort of thing would leave him tired/on edge, but really, the impact is “you can’t get Duke to do everything for you.” 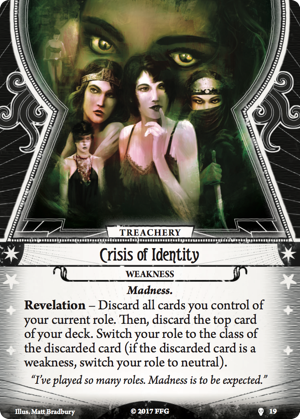 Lola is probably the trickiest to pin down – the way she plays the game is so different from all the established rules about investigators to start with, so it’s a little bit hard to sense what’s going on. Again, my understanding is that Multiple Personality-type disorders are actually pretty rarely diagnosed, although they are a good pulp trope. In Lola’s case, the way it works out in practice is with cards that decimate your board-state. Again, primarily mechanical, a balance against being able to get passive stat-boosts from many classes of card.

Likewise the Madness weaknesses which are gained by involvement in specific scenarios: The card from Dunwich mills cards off your deck, and the one from Carcosa ties in to the amount of Conviction or Doubt that your investigator has. Although these cards have the “Madness” trait, there honestly wasn’t that much about them which felt truly tied to a type of real-world “madness.”

The basic weaknesses we’ve seen so far have a mixed level of connection to their theme – Amnesia causes you to discard cards – presumably you forgot the things that you had. Chronophobia gives you horror as time passes. Hypochondria causes you horror when you take damage, as your mind over-inflates the physical sufferings. There’s a reasonable amount of links.

By contrast, I’m not really sure why Drawing the Sign reduces your hand-size? I think that this is another example of a mechanic-driven card – but when the source material is so abstract, that’s probably more-or-less inevitable. In fact, part of the difficulty with assessing these cards is down to the ambiguity of so many game elements to begin with: what exactly do cards or resources represent? Does discarding all your resources represent Bankruptcy? Or something more abstract? 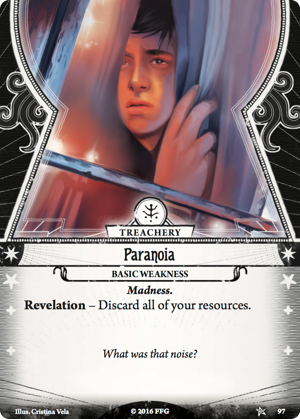 At its best, the depiction of madness in Arkham LCG is both a thematic and a mechanical success. In Curtain Call, you have the option to “Steal From the Box Office” – an action that earns you some quick cash, and seems to come without immediate penalty. However, it can then lead to the “police [being] suspicious of you” which can cause you to gain the Paranoia basic weakness later in the campaign- stealing resources costs you your resources, and an un-punished crime makes you paranoid: hard to argue with that.

At other times, the line starts to blur: when does ‘necessary simplification and abstraction for mechanical purposes’ become ‘excessive generalization?’ 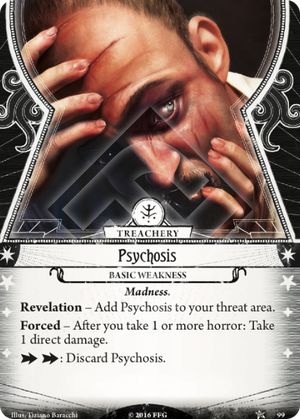 I think that Psychosis is probably the card that I find most unsettling in this regard. Psychosis is a basic weakness that goes into your threat area when you draw it, and which says “Forced: After you take horror, take 1 direct damage.” In one sense, this card is just a mirror for Hypochondria, but I found it far more troubling thematically.

With Psychosis, there is no external source of damage – your mind is under strain, and this card turns that into physical damage. The art quite clearly shows a man scratching great gouges in his own flesh.

Unlike tentacle-beasts, gateways to other worlds, or pursuit by Byakhee, self-harm is something very real, and which a lot of players of the game, or certainly people they know, will have experienced. As someone who works with a lot of folk who are experiencing mental health difficulties, I’m acutely aware that self-harm is something that’s still quite poorly understood and something that still attracts a lot of stigma. I’m not about to remove this card from my games, but I can’t pretend to be entirely happy with it.

Madness also rears its head on Treachery cards, sometimes even in the card name! 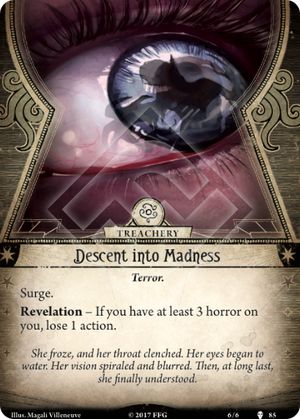 Descent into Madness causes players to lose actions if they have too much horror on them – something which is likely to be the case if they have been tangling with Eldritch beasts, or casting mystic spells.

Terror cards present direct challenges – eyes in the walls, decaying corpses, holes in reality – and challenge the investigator to muster the willpower needed to stay calm in the face of danger. As a game, Arkham Horror has to do things like this, to keep the situation interesting – and this kind of triumph over adversity is what the greatest tales are made of.

That said, there is also a recognition that there are some things which you cannot just brush off – if you get to the end of a campaign and come face-to-face with a Great Old One, there’s a good chance that neither your mind nor your body will be quite the same again.

As I noted in my broader consideration of the Arkham Files games over at Fistful of Meeples, Arkham is in a strange place – talking about a sensitive and often problematic real-life issue, but having it brought about by largely unreal situations. In that context, I think that Matt and the other designers are asking questions far more than they are trying to tell us what madness is like, or how we should feel about it, and that’s definitely a good thing.

I think that mental health is an important topic, and one that needs to be discussed more widely, more openly. For me, Arkham is (broadly) helpful in this respect, but I think we still need to remain aware of the sensitivity of the topic, and keep asking ourselves now and then whether it’s being done right.

Overall, I really enjoyed Path to Carcosa, but right now, I think I’m ready to battle something a bit more straightforward. Maybe a lost city in the rain forest, or a mystic artifact…

2 thoughts on “Speaking the Unspeakable”