I’m Peter, a long time Netrunner player and rules-nerd based in the UK. I recently wrote another guest article for Mythos Busters on Engagement geared to beginners, hopefully that helped answer a few rules questions! You can read that article HERE.

Playing recently I was struck by how a particular card, Taunt, was performing much better than I had originally anticipated. In trying to figure out why, I started to jot down ideas of what makes cards ‘useful’ in Arkham. So, in this article I’m aiming, broadly speaking, to give people a bit of a framework for examining the effectiveness of their cards and give some tips on how they are best played. Hopefully I can bring in some experience from my time with Netrunner to highlight some similarities in the two games.

As a warning, though, looking at the cards in purely mechanical terms like I’m going to discuss can sometimes detract from the magic of the game. While I hope everyone enjoys what I’ve rambled on with here, I would absolutely encourage people to stick to what they find fun in their decks, whether that’s master crafting a deck to perfectly tackle a particular scenario, or putting a deck together with theme and roleplaying at the forefront of their mind, picking and choosing cards based on what their investigator would do.

There’s an old joke in Netrunner about the card Biotic Labor.

Like all the best jokes, it requires some explaining. In Netrunner you win as the Corporation by advancing and scoring agendas, and as the Runner by accessing and stealing them. To score an agenda, you typically have to leave the card on the board during the runner’s turn; a 3/2 agenda needs to be installed, and then advanced 3 times to get 2 points.

Installing and advancing take an action each, so that is a total of 4 actions, and you have only 3 actions in a single turn. These actions can also be used, like in Arkham, to gain credits or draw cards. This means even at its most basic, your turn can be ‘take three actions to gain three credits.’

Now, an agenda on the board is far more vulnerable to the Runner than one in your hand or in your deck. A way to score an agenda without leaving it on the table makes your path to victory much less fraught. Enter Biotic Labor! It costs 4 credits to play and gives you an extra action. If you have enough money, you can play it to install the agenda and then advanced it 3 times.

This is far from the only way of scoring an agenda in a single turn, and not all agendas can be scored this way. But it’s enough for the purpose of explaining the joke, which goes like this: Biotic Labor is a terrible card, it costs 4 credits for an extra action which is only worth a single credit.

Right, I appreciate it’s hardly side-splitting, especially after that build up. But what this joke tells us about Netrunner is interesting. While you can use the extra action from Biotic Labor to click for a credit, it’s hardly a good use of it, even if you instead use that click to play another credit-boosting card. Knowing what we know about the game now, having a 4-action turn is disproportionately more helpful.

How does this apply to Arkham?

This is all very well and good, but how does it relate to Arkham Horror? What lessons can we learn?

In Arkham, we are fighting two battles.

First, we, as the investigators, want to advance the Act before the Agenda advances. This is a generalization; some scenarios work differently and have additional goals, but we are usually working together with a limited amount of time before something bad happens. We want cards that enable us to get the most benefit out of individual actions, typically by enhancing the ‘base’ investigator actions, or action ‘expansion’. The risk here is giving oneself spare actions without having productive ways to spend them, and while I have some thoughts on that, it’s a topic for a whole separate article.

Cards that make the base actions more efficient or expand on individual actions are often referred to as ‘economy cards’. Emergency Cache is a great example of this, as is Dr Milan Christopher.

Secondly, we are fighting a day-to-day battle for survival within our own turns. We have 3 actions per turn to deal with the effects of the encounter deck, to build up our board states, and to progress in the larger battle of the scenario.

Now, we don’t have the same natural ‘action break points’ in Arkham as there are in Netrunner. For those familiar, 4 actions as the corp is enough to score a 3/2 agenda from hand, which is very powerful. 5 actions for the runner (runners have 4 actions as a base) isn’t as powerful, but allows various high-pressure turns without any response from the other player, or enables the runner to better utilize the ‘run all 3 centrals’ cards. 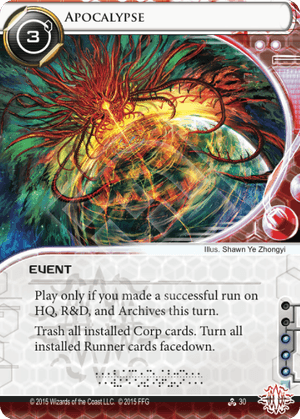 Rather than these firm break points, the key concern in Arkham, turn-by-turn, is most likely to be the presence of enemies. Enemies attack in the monster phase, after every investigator has taken 3 actions. That’s 3 actions per investigator to mitigate the effects of those attacks by evading and defeating monsters, or by pulling out other tricks. We might additionally look at effects that trigger at the end of the turn (such as locations or treacheries) or those that trigger at the start (additional actions maximize the use of beneficial effects that last your whole turn).

Breaking this down with combat in particular, 3 actions in Arkham is enough for a combat character to attack 3 times. If an enemy is engaged with another player, they can engage (if they’re using a machete or are unwilling to risk hitting an ally) and attack twice. If they are engaged with another player at a connecting location, they will need to move, engage, attack. Any situation more complex than this (additional enemies, medium-to-high health enemies, additional moves, location effects, actually failing tests) is taxing your actions and will cause damage to be dealt or for non-combat characters to ‘waste’ actions evading.

Even though we’re only looking at combat, we can start to see that additional actions are incredibly useful, and the cards that provide generic extra actions are possibly the most useful of all – cards like the undoubtedly powerful Leo de Luca. We can judge other cards based on how often the ‘situation complications’ occur. With a complex map that requires lots of moving, the ability to make additional moves (through such cards as Shortcut or Elusive) gain in usefulness. In scenarios with medium- (3+) or high- (5+) health enemies, additional sources of damage are helpful. And where we’ve got multiple enemies spawning, or Aloof enemies, Taunt comes into its own. 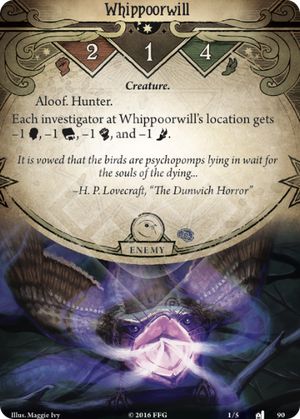 Let’s run through some individual cards to see how they fit into this framework.

A random selection of cards 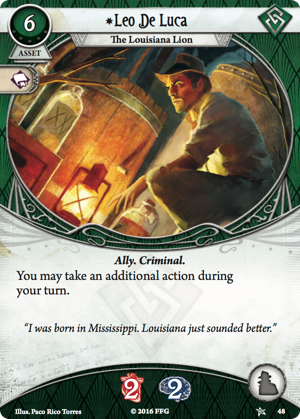 I’ve heard it mentioned that Leo isn’t worth playing unless you’ll have 7 turns use out of him, as that’s how long he takes to pay himself back. This is directly equating actions and credits, and is broadly a tempo argument along the lines I’ve previously discussed. While I do think there is some merit to this line of thinking, it ignores the additional value having a 4-action turn has. Hopefully the thrust of this article has convinced people that the value of actions can’t be directly equated to resources or cards; not all actions are equal!

Taunt was the card that inspired this article. When I picked up Zoey during the Dunwich Legacy campaign I included Taunt just because it combo’d with her ability, not expecting to get much use out of it. However, I found whenever I drew it I would find a use for it inside the next few turns, and so many times I would be sitting looking at the board just wishing I had one.

Taunt gives you actions right when you need them most. It’s comparable to Shortcut in many ways, in that it will always save you ‘at least’ an action.

An example springs to mind: As Zoey, I am at a location with a 4-health Monster engaged with Rex; there’s a Whippoorwill here too. I have her Cross and a Machete. No matter how I try to cut this, I can’t get through the turn without someone taking damage… Until I drop Taunt. When I do, I can kill the Whippoorwill with my Cross (another free action!), leaving me 3 actions to attack the hefty Monster while gaining bonus Machete damage (with an action spare for a failed attack too).

Police Badge is possibly the card most directly comparable to Biotic Labor: it costs 3 and only gives 2 actions which give you 2 resources so clearly it isn’t worth it! I feel Police Badge hasn’t seen too much play as people have been looking it as too large a tempo hit (I’m as guilty of judging the card this way as anyone). While you can, of course, take the 2 additional actions during the turn you play it for a single 4-action turn, a more effective turn is to bank a ‘spare’ action during the early game in order to enable a 5-action turn when high impact is required.

Note of course Police Badge can be used with any investigator at your location, making it perfect to use with…

Will to Survive (and others)

There are a few other cards in this category as well, ones that provide a benefit for the duration of the turn, like Mind over Matter, On the Lam or Encyclopedia. The spoiled ‘turn-long boost’ Talents from later in the Dunwich Legacy cycle would also work!

I hope this has been helpful in some way to people coming to Arkham as one of their first LCGs. Maybe it’ll prompt questions about deck-building, like how to maximize your turns, how to advance the act, or even what happens in the spaces when you’ve managed that.
Thanks again to Mythos Busters for the hard work on their ‘cast, to Matty ‘angedelo’ for some checking, and to Frank ‘zooeyglass’ for help bouncing ideas off and some serious editing heavy lifting. If you want to chat to me, I am usually over on the Arkham Horror reddit or the Mythos Busters Discord server (I go by unitled in both places).